Armitage and Plame drive final nails into own political coffins as collaborators in Fitzpatrick's political show-trial of Scooter Libby.  Note:  For Updated/Archived version of this installment go here.  For best-quality, full-size WMV version of the video "Wilson-Plame--CIA-APM" go here.

On Sunday, November 11, 2007, on CNN's "Situation Room" with Wolf Blitzer, Richard Armitage joined Valerie Plame Wilson in driving the final nails into their own political coffins as collaborators in Patrick Fitzgerald's political show-trial against Scooter Libby with a jury drawn from one of the most intense hotbeds of political hatred for George W. Bush– i.e., Washington D.C. (Hat tip to Bryan Preston at Hot Air.) To view the CNN clip, click the image below-left, but if the image-link for a CNN clip doesn't appear below or doesn't work, click here. (For prescient video and commentary pre-dating Armitage's post-witch-hunt admission, click image below-right, but if a PoliSat.Com image for such link doesn't appear or doesn't work, click here.) 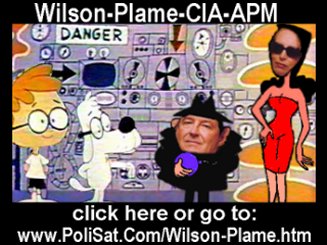 Fitzgerald's appointment was for the purpose of discovering, and prosecuting if warranted, whoever "leaked" to the press the status of Valerie Plame as a CIA employee who promoted her anti-Bush husband, Joe Wilson, for a "mission" to Niger to investigate intelligence reports that Saddam Hussein had attempted to acquire "yellowcake" uranium.

The witch-hunt nature of such prosecution became undeniably clear when, in the latter stages of Fitzgerald's relentless pursuit of Vice President Cheney's Chief of Staff, "Scooter" Libby, it became public (no thanks to Fitzgerald) that almost immediately after he was appointed, he learned the "leaker" who disclosed such information to columnist Robert Novak, a staunch critic of Bush's decision to topple Saddam, was none other than Colin Powell's deputy, Richard Armitage, who also was a staunch inside-the-Bush-Administration critic of Bush's decision to topple Hussein. Thus, Fitzgerald knew almost at the beginning that the "leaker" was an opponent of Bush within his administration; that the recipient of the leak was a commentor likewise opposed to toppling Saddam; and that the subjects of the leak–- Valerie Plame and Joe Wilson —- were likewise staunch opponents of such policy. Thus, the "leaker" was politically simpatico with the subjects of the leak rather than a Bush administration official opposed to their views. Consequently, Fitzgerald knew from the start that the allegations (by Plame, Wilson and other critics of Bush) that "leak" was by a Bush Administration official acting with intent to "retaliate" against Plame and Wilson were false and that the "leaker" was instead an inside critic of Bush who was politically sympathetic with Wilson's and Plame's (and Novak's) harsh criticisms of Bush's decision to topple Saddam.

It's difficult to imagine what else would be necessary make it self-evident that Fitzgerald's subsequent continuation of his "investigation" and his relentless pursuit and prosecution of Libby constituted anything less than a political witch-hunt of the kind we came to expect in the China and the Soviet Union-- especially in light of Fitzgerald's having instructed Armitage from the "getgo" to keep his mouth shut about his having identified himself as the "leaker."   Furthermore, As Bryan Preston aptly noted, Valerie Plame describe the action by Armitage (whom she knew to be an opponent of Bush within his administration) in "leaking" her name to Robert Novak as "foolish" but had consistently described the alleged "leak" by Scooter Libby as "criminal" conduct equivalent to treason.

For questions that Fitzgerald should be required to answer to a bar association (as was Nifong), see my "Open Letter to Patrick Fitzgerald re 'Scooter' Libby, Joseph Wilson, Valerie Plame, Richard Armitage, Karl Rove, Robert Novak, et al.".  To critics of my commentary about Fitzgerald who would point out that a "jury" convicted Libby, I borrow an analogy from football to say a prosecutor who obtained a conviction of a an official of the Bush administration by a jury in one of the hottest of anti-Bush hotbeds in the country (Washington, D.C.) is not entitled to do an "end-zone dance."   Indeed, I think Libby has an excellent chance for a reversal of his conviction on appeal-- especially in light of two things: (1) abundant evidence that other witnesses gave "false" testimony that was justifiably attributed to the frailty of human recollection rather than perjurious intent and (2) that the court excluded scientific evidence proffered by Libby to support his assertion that "false" testimony he gave was likewise the product of such human error. At the very least, such proffered scientific evidence had substantial probative value with respect to Libby's assertions of innocence-- especially under the "reasonable doubt" burden of proof in criminal cases.

The permanent link to the Archived/Updated version of this installment is:
http://polisat.com/DailyPoliticalSatire-Commentary/Archives2007/du20y07m11d13-01.htm.

Proper application of the Federal Rules of Civil Procedure would impose Rule 11 sanctions against Joseph Wilson, IV and Valerie Plame (hereafter, "Wilson/Plame") for their spurious law suit alleging Dick Cheney, Karl Rove and others "exposed" and/or "conspired to expose" what Wilson/Plame falsely allege was an "undercover" status of Plame's employment at the CIA at the time of Robert Novak's July 14, 2003, column identifying her by name, "Valerie Plame," as Wilson's wife and reciting that it was upon her recommendation as a CIA employee that the CIA had dispatched Wilson to Niger to "investigate" intelligence reports that Saddam Hussein had sought to make arrangements to acquire uranium from Niger.  Why does their filing such suit warrant Rule 11 sanctions against them?  It's because they know the foundational premise for their suit to be false.

Wilson/Plame know that years before Novak's July 14, 2003, column actions of others in our intelligence community had compromised her then-covert status as "Valerie Plame."  Long before Novak's column, Wilson had either defied CIA restrictions against, or obtained CIA permission for, his touting her extremely uncommon maiden name, "Valerie Plame" (also her "covert" name) as the maiden name of his wife on his website touting himself internationally as a former "Ambassador" for the United States as part of his curriculum vitae for consulting work in international relations.  Wilson/Plame knew that absent the true status of "Valerie Plame" having already become compromised, Wilson's identifying her (extremely uncommon) name as his wife's maiden name on his website touting his expertise in international affairs as a former ambassador for the U.S. would have enabled non-stupid adversaries with rudimentary internet skills to "connect the dots" to discern that person known to them as "Valerie Plame" was married to someone touting himself as a loyal agent of the U.S.-- i.e., that her true status was something other than what she had purported it to be.

Thus, if Wilson/Plame were to have genuinely believed she was still serving in a covert capacity and were to have genuinely believed that for her "true" identity to be discerned by adversaries would pose a danger to her safety and/or the safety of her children, then Wilson would not have identified his wife on his website other than as "Mrs. Joseph Wilson, IV."   Therefore, his having identified her (extremely uncommon) maiden name (which he knew she had used as her "covert" name)  as the maiden name of his wife makes it self-evident that Wilson/Plame either:  (a) knew that her true status had already been exposed and that she was no longer a "covert" operative or (b) were carelessly, recklessly, stupidly and/or criminally indifferent to common-sense precautions that they would have been legally obliged to take if they were to have still believed that her status remained "covert."

Shortly after the Novak column, Wilson removed from his website his prior identification of his wife as "the former Valerie Plame."  However, he apparently did not know that an internationally recognized, independent "archive" of the internet had already permanently preserved the version of that website page as it existed before he altered it.  The name for that internet archive is the "WayBack Machine," named after the fictional device used by the Bullwinkle cartoon's dog "scientist" named "Peabody" as a time-travel machine to allow "Peabody" and "Sherman" to travel back into the archives of history.  The url address for the WayBack Machine is:  http://www.waybackmachine.org/.   The WayBack Machine url's for displaying the the February 8, 2003, version of Wilson's website preserved for posterity in the archives of the internet are here·º¹· and here·º²·.  No matter how much Wilson/Plame may try to claim to the contrary, the WayBack Machine is not a tool of Dick Cheney, Karl Rove or Scooter Libby, nor is any of them an "agent" of the WayBack Machine.  Nor is there any "conspiracy" among Peabody, Sherman, Bullwinkle or Rocky to expose Wilson's and Plame's mendacity.

This is not the sole example of Wilson's and Plame's mendacity in claiming that Novak's July 14, 2003, column had "outed" her as an "undercover" agent for the CIA.  There are many more.  For examples, see an October 5, 2005, Weekly Standard article,·º³· one of many articles from a variety of sources exposing the facts.

The true nature of her "status" that was really "blown" by, or in the wake of, Novak's July 14, 2003, column was her status as a political mole operating inside the Bush administration on behalf of Wilson as a staunch supporter of John Kerry in a bitter campaign against Bush.   The real story is about how a CIA employee used her status at the Agency to confer superficial credibility upon actions by her husband to propagate falsehoods and disinformation in an attempt to discredit Bush in order to help Bush's opponent, John Kerry.  It's the real story to which the dominant media (a.k.a. "MSM") prefer not to draw attention.

Note:  The permanent link to this installment is at http://PoliSat.Com/Wilson-Plame.htm., where there are other versions of the video below for other sizes/connection-speeds.

The version below is for medium-speed connections:

The version below is the largest size for the highest-speed connections:

The version below is for dialup connections: