Republicans Claim Hillary Clinton Started the War on Women contradicting her 2016 claim that victims of sexual assault have a "right to be believed."

Republicans claim Hillary Clinton started the "War on Women" contradicting her 2016 Campaign in which Hillary claims she supports sexual-assault victims' "right to be believed."   As proof, they published this obviously "SFW" picture (by the official White House photographer) showing Hillary Clinton leading the way for Bill Clinton to attack women believably saying they were sexual victims of Bill Clinton, but they claim there's a "NSFW" version of the same picture, which they had "too much decency" to publish even though they acquired it from a reliably high source who served in the Clinton White House.

But Fearless Leader promptly came to Hillary's defense by saying, "If you like my word, you can take it, and you can take my word that the 'SFW' picture shown above is an amateurish photo-shopped version of an actual White House photo showing Hillary leading Bill on a romp through a meadow, and I'd say the same thing for the 'NSFW' version of that picture.  In fact, I remember seeing it 'in the news' about their harmless 'romp through the meadow' way back when I was marching across the bridge at Selma, Kenya while helping my half-brother paint his house."

However, another Clinton White House picture (taken in the Oval Office) plainly corroborates Kathleen Willey's claim that Bill Clinton groped her breasts when he welcomed her to the Oval Office to show his appreciation for the volunteer work she had done on his campaigns, but Bill adamantly assured her that since her perky breasts seemed engorged in pain, he was "not groping her breasts" but rather was merely "feeling her pain."    In the background, a voice sounding like Hillary's said (to Kathleen Willey):  "You have a right to shutup and accept Bill's denial that he's groping your breasts -- you ought to appreciate such individualized attention from the President of the United States in 'feeling your pain."

Furthermore, notwithstanding what Hillary, Bill and Fearless Leader say, people who've read the Clinton Liebrary Book (2001 Edition) know that she launched the "war on women accusing Bill Clinton of sexual offenses against them" (such as Kathleen Willey saying Bill Clinton groped her breasts in the Oval Office when she was working as a volunteer shortly after the death of her husband (even though the above still-frame from White House video shows that Bill Clinton denied he was groping her breasts while groping her breasts); Juanita Broaddrick saying that Bill Clinton raped her when he showed-up at her hotel room when she was working as a volunteer for his gubernatorial campaign in Arkansas, Paula Jones saying Bill Clinton exposed his genitals to her in her hotel room when she was working as a volunteer at the Arkansas State Fair where he was making an appearance as Governor of Arkansas, Monica Lewinsky saying that Bill Clinton seduced her into performing oral sex on him in the Oval Office, etc., ad naseum.  (Scroll-down further or click here for more regarding Hillary Clinton and Kathleen Willey.)

But one courageous reporter (PoliticalXray.Com's Washington Bureau Drawer Chief) asked Bill Clinton to explain "who is really waging a 'war on women,'" to which Bill Clinton responded:  "It depends on what the meaning of 'on' is."

A rare, candid photo of Bill Clinton by a Clinton-campaign photographer (shown above) illustrates what Clinton meant by his response to the question asking him "who" is "really" waging a "War on Women" when he said, "The Republicans wage WAR on WOMEN, but I wage war ON women."

Bill Clinton then nostalgically added, "You know, you gotta hand it to Monica for having been so prescient way back then to have been able to see into the future to know that in 2015 science would prove the dangers of sex in the "'Cowgirl Position' -- especially since virtually all women at that time had already learned the dangers of patriarchal sex in the 'Cowboy Position' (previously known as the 'Missionary Position') and for that reason had been insisting on sex in the 'Cowgirl Position' as being the only position consistent with what was then known as Enlightened Feminism, and you also gotta hand it to Monica for also having presciently know way back then that in 2015 science would also prove that 'clitoral' stimulation is the only way for a woman to have an orgasm and thus also prove that the 'Cowgirl Position' could only lead to frustration and never to satisfaction and that, therefore, 'oral sex' would become the method most preferred for females to satisfy males first and thereby save themselves from pointless efforts in the 'Cowgirl Position' in favor of it then being easier for the male to satisfy the female by 'clitoral stimulation' using exotic tools such as Cuban cigars."

After the debate between Hillary and Bernie Sanders in which a "hot-mic" exchange between Hillary and Bernie over "gun" control was "picked up" and broadcast by a "pod-cast-news network," a reporter caught Hillary Clinton off-guard by asking her about what Bill Clinton recently nostalgically said about the "cigar sex" with Monica Lewinsky.  In response, Hillary said, "Bill took advantage of me -- every time he gave me a cigar back then, he told me to 'smoke it,' but I never understood why people think Cuban Cigars are so great because to me every single one I've smoked has had a fishy taste."

After agreeing with Hillary on the value of the public-service safety video, the reporter returned again to the subject of Hillary and Monica.  When asked by the reporter to characterize her current attitude towards Monica Lewinsky, Hillary Clinton said:  "I'm sue you remember that I severely disciplined her after she told so many lies during her 'TED TALK' in 2015, as you can see from this photo-shopped version of our back-stage encounter just afterward ... but since then ... 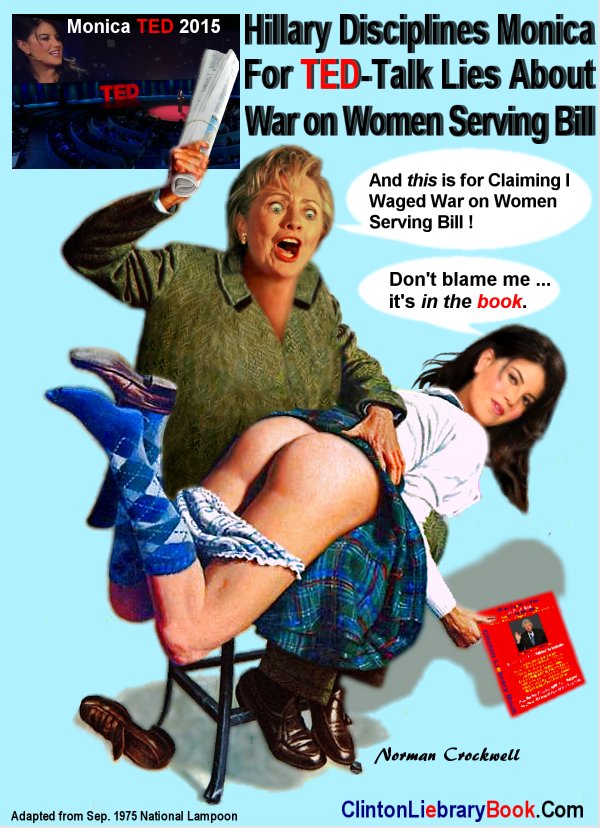 ... Monica  ... uh ... actually was quite helpful to me recently-- first by consulting with me on my poor choice of words in a news conference in which I failed to make clear who creates jobs when I said 'Don't believe all that trickle-down ... Bosses don't create jobs' and then by appearing with me to issue a correction giving credit where credit is due by stating, 'Don't swallow all that trickle-down ... Bosses don't give-out jobs, interns do.'"

More recently, however,  controversy arise in the wake of  Hillary Clinton's recent support for sexual-assault victims by advocating their "right to be believed" (as shown in the video below-left) when Megyn Kelly interviewed Kathleen Willey (see video below-right):

So, who's reading the Clinton Liebrary Book (2001 Edition)?